Posted on December 8, 2015 by Surfing Hollywood 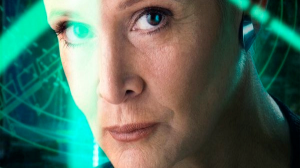 Santa Monica, CA — In preparation for the release of the highly anticipated Star Wars: The Last Jedi, I recently re-watched the original trilogy of films as well as The Force Awakens.

The Star Wars Movie I’ll Never Get To See

(But Really Want To!)

After watching Return of the Jedi, I realized the next film (or trilogy) in the series that I really want to see is Princess Leia: Jedi Knight.

Why did George Lucas never go there? Too chauvinistic? Too untimely for the ’80s? This was pre-Buffy, pre-Alias, pre-Xena, each a sarcastic action benefactress of Princess Leia.

Carrie Fisher’s Princess Leia coulda kicked more butt learning about The Force from twin brother Luke Skywalker.  Story-wise, perhaps, she would be the next Skywalker to be seduced by the Dark Side of the Force.

In Return of the Jedi, she takes the news that Darth Vader is her father pretty non-chalantly.  Vader tortured her and destroyed her home planet in Star Wars, after all.  And as we all know, Anger and Fear lead to The Dark Side.

There’s an awful lot of Story to explore there with Fisher (who was so good) taking center stage in what Lucas described as more “family soap opera than a story about spaceships.”  Leia fired guns, flew the Millenium Falcon, rescued frozen boyfriends.

She did it all and could have done so much more.

Fisher’s sudden death in December 2016 has made The Last Jedi her swan song as General Leia. Spoiler: The character survives and her fate is left to J.J. Abrams who is writing and directing Ep. IX which is due to hit the theatres in December 2019.

In re-watching the original trilogy, I realized the first film doesn’t hold up well nearly 30 years later.  The Empire Strikes Back, however, remains terrific.

Full disclosure:  I saw TESB five times the summer it was released, and at the time, could quote lines verbatim.  As for Return of the Jedi, I am still touched by the passing of both Yoda and Anakin Skywalker/Darth Vader and am still very much creeped out by the Emperor.

Yet, it’s the possibility of seeing Princess Leia: Action Hero that excites me, story-wise.

In my mind’s movie projector, Luke did train Leia to use the Force, and she was seduced by the Dark Side, thereby becoming the de facto villain.

The next two films that would have followed would have seen Luke and Han Solo attempting to save/thwart Leia with Luke ultimately saving her by allowing himself to take her place as a Dark Jedi (not an actual term, I think).  Too obvious?  Probably.  But had these films been made in the ’90s, they would have been great.

As for Fisher, her post-Star Wars filmography includes memorable supporting turns in some terrific films:  Agatha Christie’s Appointment with Death, Hannah & Her Sisters (in which she co-starred as April whom Dianne Wiest’s character didn’t like because she was “pushy”), When Harry Met Sally, and Soapdish.

Of course, Fisher literally made her mark as a novelist (The Princess Diarist, Postcards from the Edge, Surrender the Pink), Hollywood script doctor, and stage performer (Wishful Drinking), but it’s that missing turn in Star Wars that I wonder if her Writer Self ever considered:  Could Leia have carried the next three films?  Or, why the hell didn’t she get the opportunity?!

Also, with gender equality and salary a big issue right now thanks to Jennifer Lawrence, I wonder if Fisher was paid equal to Mark Hamill and Harrison Ford for the first three films as they shared top billing. I am guessing not.  I’d love to hear her thoughts on this issue. Sadly, we never will.

Unfortunately, in a recent interview on Good Morning America, Fisher entertained rather than informed due to some banal questioning by reporter Amy Robach.  Here’s the link to the interview which has swept Social Media because Fisher (who appears with her dog Gary, a star in his own right on Twitter) is so damn funny:

Let me know what you think about the missing Trilogy of films featuring Princess Leia as the latest Skywalker to use The Force.  I remain steadfast in my belief that those films woulda been great!

Meanwhile, Star Wars: The Last Jedi looks well on its way to making a Billion dollars and continuing Disney and Lucas Film’s winning streak at the box office following the successful release of both Rogue One and The Force Awakens.

And speaking of funny, Star Wars fans will greatly appreciate Funny or Die’s group therapy for those still regretting The Phantom Menace….

Steve La Rue is an internationally recognized leader in Film & Television with 20+ years experience as a Development Executive championing such series as Buffy The Vampire Slayer, The X-Files, The Simpsons, King of the Hill, Battlestar Galactica, and Farscape. He writes, blogs, and consults on All Things Entertainment from his home at the beach in Santa Monica, CA, where he balances his life by surfing every damn day.
View all posts by Surfing Hollywood →
This entry was posted in Film Surf Report and tagged Carrie Fisher, Disney, Fan Fiction, George Lucas, Jennifer Lawrence, JJ Abrams, Leia, Lucas Film, Princess Leia, Rian Johnson, Rogue One, Ron Howard, Star Wars, The Force Awakens, The Last Jedi. Bookmark the permalink.