Style Surf Report: Dressing Like Roger Federer, Mens Tennis’ G.O.A.T, Will Set Ya Back A Pretty Penny On or Off The Court

Santa Monica, CA — When I am not surfing, I love to play tennis, and it’s one of the very few sports I consistently watch on TV. This past week, the world’s best players showcased the sport in Key Biscayne at the Miami Open.

One big reason I remain engaged with this sport (after 40 years) is its most popular and successful men’s player:  Roger Federer, the Swiss Maestro.

Federer is enjoying an incredible 2017, having won his 18th Grand Slam at the Australian Open in January.  And while I cannot play Tennis like Roger Federer, I can dress like him, and so can you, dear Reader … but it’s gonna cost both you and me quite a few bucks.

This past weekend, 35-year-old Federer stunned the Sports World for the third time in three months when he won the Miami Open beating rival Rafael Nadal for the third time this season. Last month, Federer won the BNP Paribas Open in Indian Wells, CA, beating countryman Stan Wawrinka 6-4, 7-5 in the final.  His one-handed backhand is a thing of beauty.

Federer wore a sharp-looking green Henley shirt (by Nike) during his matches at Key Biscayne and at Indian Wells.  I predict that shirt will be a big seller in the months to come.

It is the shirt of a Winner.

Top players like Federer, Nadal, Serena Williams  (Womens Tennis’ G.O.A.T) and Novak Djokovic all change up their clothes so that viewers/tennis players wanting to emulate their style will keep up with their changing looks. You won’t see Federer wearing the same shirt or shoes at Roland-Garros (aka, the French Open) that he wore at the Australian Open, and definitely not at Wimbledon (which features predominantly white clothing).

But what does it cost to dress like Federer on-court, not to mention off-court?  GQ Magazine boasts Federer on the cover this month, and inside its pages, Federer’s casual dressy clothing ensembles could run ya anywhere from $155 (casual wear) to $10k (dressy), and the very expensive Rolex watch is not included.

The clothes look great, and Federer is one of those guys who wears clothes well. 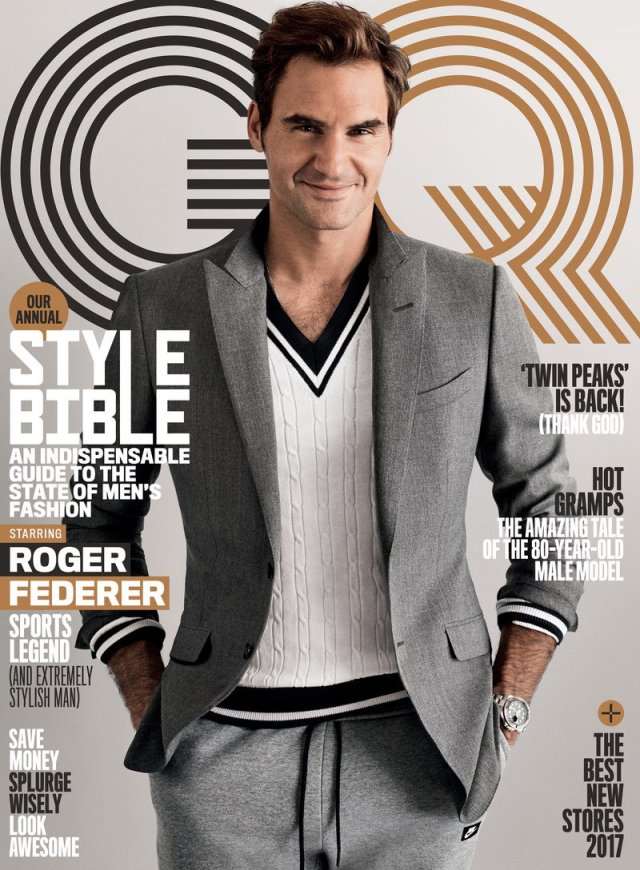 I am a tennis player.  I sometimes wear Nike shoes, Addidas wristbands, Nike shorts, and a Head dry-sweat sports Shirt.  I am not stuck on Labels.  My clothes are all over the place and could best be described as Hodgepodge.  I could definitely use a wardrobe makeover even though I am an amateur club player (without a club…it’s public courts for me in Santa Monica).

I have been playing since Junior High School when my brother Ben and I rode our Western Auto bikes a coupla miles to the high school tennis courts in Hodgenville, KY.

Our first wood rackets (see photo below of me and my Jack Kramer Autograph) were purchased via S&H Green Stamps attained at the local grocery (thanks, Mom!).  Clothing and Sports Attire were pretty much an afterthought.

We wore Converse tennis shoes with zero arch support and tube socks, shorts and a t-shirt. In school, tennis season was Springtime when it usually rained out a lot of practice sessions and most scheduled matches.  Sweats and sweatshirts ruled the day. 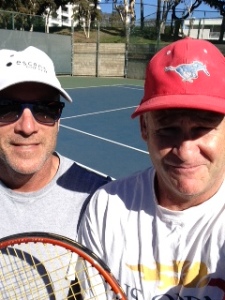 A few decades later, I have matured along with my taste in tennis clothes. I know I should and could dress better, but I love my sweat-stained SMU Mustangs hat and my 2002 US Open T-shirt.

So, How much does it cost to dress like Roger Federer?

Were I to hit the court today, or in two days courtesy of Amazon or Tennis Warehouse, dressing like Federer would cost me about $1,000.00 (plus extra for tennis balls, extra rackets, and string jobs).

His pricey Rolex watch is not included.  In fact, Federer has a collection of them: https://www.rolex.com/every-rolex-tells-a-story/roger-federer-rolex-watch.html

So, should I go online and emulate Federer from head-to-toe, here’s the breakdown of his clothes and racket(s) with retail prices courtesy of TENNIS WAREHOUSE – FEDERER’S CLOTHES (assuming shipping will be free if ya go for the entire Fed Kit):

Federer personifies Cool.  I like his clothes, his style, his gentlemanly demeanor both on-court and off.  He seems to really like Clothes, ya know?

One of these days, I’ll update my tennis clothes, piece by piece, to get it together.  So don’t get your hopes up just yet, Tennis Warehouse.  (And back off with the daily emails, please!).  Meanwhile, there’s always Surfing!

Throwback Thursday and How I Rocked The Generic Sweatshirt Look in the ’70s.

Steve La Rue is an internationally recognized leader in Film & Television with 20+ years experience as a Development Executive championing such series as Buffy The Vampire Slayer, The X-Files, The Simpsons, King of the Hill, Battlestar Galactica, and Farscape. He writes, blogs, and consults on All Things Entertainment from his home at the beach in Santa Monica, CA, where he balances his life by surfing every damn day.
View all posts by Surfing Hollywood →
This entry was posted in Surfing Life and tagged ATP World Tour, BNP Paribas Open, GQ magazine, Jack Kramer, Roger Federer, SMU Mustangs, Tennis, US Open Tennis, USTA. Bookmark the permalink.