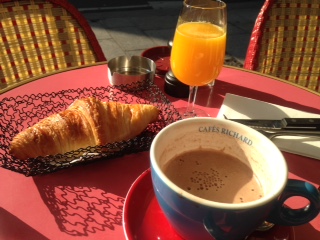 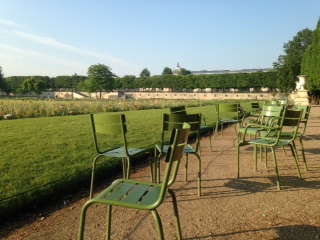 Week Three: In The Groove

Paris — I have got it together now. Am getting up early. Am going for walks along The Seine. Paris sleeps in. Those red wine comas have that effect on ya. This river city is really lovely when most of its inhabitants are still abed.

Have found a sidewalk café I like a lot: Le Celtic. Have been stopping there regularly for a Petit Dejeuner (juice, croissant, chocolat chaud). The morning sunshine is just perfectly golden as you sit outside at the little tables, savoring that first hit of caffeine.  Aah, formidable!

Shower. Go see a landmark. The Louvre? Sure. Or, take Le Metro to Roland Garros. Easy.

Thank you, Google Maps.  In Paris, scores of tourists walk the city staring at their smart phones, but what you don’t know is that they are following walking directions via this great App.  No need to ever get lost again. Vive Technologie!

A Moment of Zen in the City of Light.

In a vacation filled with many wonderful moments, I had A Moment at the place I least likely expected one: Notre Dame.

One morning, I got up early intending to walk along the river so as to walk off last night’s heavy cheese and bread course when I found myself at the city’s most famous cathedral. Normally, there are a gazillion tourists milling outside but on this particular early morning, no one was yet about so I had it all to myself.  There was even a door open admitting parishioners to the 8 AM service.

Bells were tolling and they tolled for me.

What a pleasure to have Notre Dame all to oneself to stroll leisurely, to read about its fascinating history (which includes its earliest incarnation as the Cathedral of St. Stephen) and to listen to the singing from the service.  A moment of Zen in the City of Light. Sitting there, surrounded by history, I could not help but think of my father, my family, and gave thanks for all who encouraged me to make this trip which was 54 years in the making. 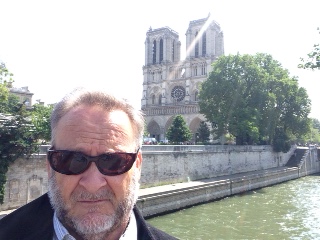 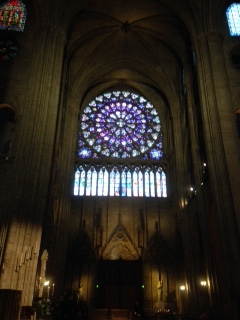 The Road to Roland-Garros Includes A Stop for Hot Chocolate.

As a lifelong tennis player, visiting Roland-Garros (aka, The French Open) is a Thrill. I have seen this clay court Grand Slam tournament played for decades, and it’s always been one of my favorites.

I follow tennis with the enthusiasm that most Kentuckians follow basketball: I love it and can talk Tennis all damn day! Yes, I am that guy. My favorite player is Roger Federer, the Swiss Maestro.

I take the subway to R-G during morning rush hour for Parisian commuters, so the train cars are packed like sardines in a can.  I let a few go by thinking one will come along that is less crammed full of humanity, but none do.  Finally, I squeeze in just like everyone else.

Amazingly, commuters can stand in a crowded subway car and read a book.  Now, that’s relaxed. I stand uncomfortably and wonder what books everyone are reading!

After my transfer, I arrive at the stop for R-G which includes a little walk to the stadium.  I pop in to a café and enjoy a Chocolat Chaud at the bar like the pro Parisian that I now am. The guy next to me wears a suit and has an R-G badge.  He is working security for the stadium. He drinks two espressos. 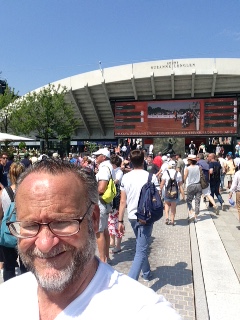 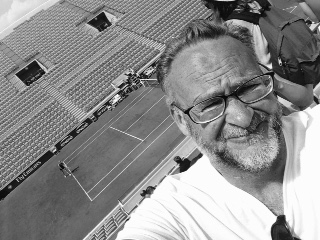 The first match I watch goes three sets and lasts 2.5 hours. I unwisely choose a seat on the sunny side of the court, but hey, it’s morning sun, so I should be okay.  By the time, the match is over, I feel as though I have been burned, baked and buried by the now very intense French sunshine. It’s the hottest day of the year so far in Paris.

I am fried. A French frite.

It’s a long day, but a good day as I watch a few more matches, chat with some really fun people, stop and listen to some roving minstrels before making my way through the security gauntlet and head back to the subway for the return trip to my apartment where there is a cold shower waiting for me.

On the subway, I am Sunburned Dead Man Walking. Totally zombie-like. You know the guy. Vacant stare. Possibly mumbling.

Sometimes, I learn, Paris can kick your butt … even when you are in the groove.

An American (Surfer) in Paris – Continues

Steve La Rue is an internationally recognized leader in Film & Television with 20+ years experience as a Development Executive championing such series as Buffy The Vampire Slayer, The X-Files, The Simpsons, King of the Hill, Battlestar Galactica, and Farscape. He writes, blogs, and consults on All Things Entertainment from his home at the beach in Santa Monica, CA, where he balances his life by surfing every damn day.
View all posts by Surfing Hollywood →
This entry was posted in Surfing Life and tagged Americans in Paris, Chocolat Chaud, France, French Open, Hot Chocolate, Le Celtic, Le Metro, Mass Transit, Mobility, Musee Louvre, Notre Dame, Paris, Paris Subway, Roger Federer, Roland Garros, Surfers, Tennis, Tennis Players, Travel. Bookmark the permalink.