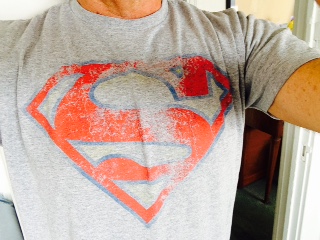 Santa Monica, CA — I have been hooked on Origin Stories ever since Clark Kent held up that green Kryptonian crystal in the family barn and wondered from whence he came in Richard Donner’s Superman.

In anticipation of attending The Great American Pitch Fest this weekend in beautiful downtown Burbank, I am shouting out to all the Screenwriters, Makers, Creators to be ready to discuss their own Origin Story in addition to any cool television or film project.

If you can successfully sell your own Story, then I’m ready to listen to the one you’ve cooked up to sell this weekend to Hollywood’s agents, producers and executives.

Of course, turnabout is fair play, so with that in mind, I have crafted my own Origin Story which, to my delight, has clear patterns that reinforce my Life Choices!

My own family barn is well over 100 years old and is situated on the 2-acre family property that at one time was known as The O.T. Daugherty Farm.  O.T. is my maternal great-grandfather, and he built the 100+year-old house in which I was reared.

At my most difficult teenaged moments, I searched O.T.’s barn for trapdoors holding green crystals that held clues and mysteries to my own Origin Story as I sometimes felt alien (and alienated) growing up in rural Kentucky in the ’70s.

Not until I started high school did I learn of my Destiny.

As every kid who starts high school hopes and dreams, I got braces the month before freshman year.  I would be stuck wearing them for the entire four years and would enjoy the awkwardness of adolescence coupled with the inability to smile a toothy grin.  Well-meaning adults would placate me with the maxim, You’re Going To Be A Late Bloomer.

In high school, I started writing for the school newspaper, Hawk Talk, and was subsequently elected Reporter in every club and organization I joined.  Humor was my weapon and I aimed it effectively.  In the fall of 1980, my senior year, the long-running CBS television series, Dallas, resolved the Who Shot J.R.? cliffhanger, and I correctly predicted the identity of the shooter (Kristin!) in a frontpage feature story gaining kudos and plaudits from the farthest corners of high school society.

My fascination with Television and All Things Entertainment began in earnest.  The Media Monster within me was born, mutated, spider-bit.

I got jobs at the local newspaper, The La Rue County Herald News, setting copy (then called Composition or Typesetting) and at the local radio station, WLCB 1430 AM, working as the weekend DJ.

At The Herald, I learned to type fast as the editor would frequently stand over my shoulder imploring me to pick up the pace as she could not afford to pay me overtime.

At WLCB, I would dedicate songs to friends who rode by the town square honking car horns and get in trouble with the station manager when I replayed the same song twice in a row because I liked it so much.  This was the year of Michael Jackson’s ground-breaking Off The Wall album. Rock With You was an anthem.

When the time came to choose a college, my parents left the process entirely up to me. Perhaps they were just too tired or else I was just too independent. I am the youngest of eight kids, so they had been through this too many times to do it again. My dad’s only caveat was that I could not go to a school north of the Mason-Dixon Line because he believed a Southern education would ensure that I maintained my good manners.

So naturally, I applied to Syracuse.

And also, to a school I glimpsed on several episodes of Dallas, called SMU.  Charlene Tilton’s character Lucy Ewing was a cheerleader there in between seducing ranch hands, and the campus looked really pretty.  So, I sent away for information, applied, and received early acceptance with a modest scholarship in Journalism after an appealing campus tour with Mom & Dad.

I am thoroughly impressed with my parents 30+ years later for their seemingly unconditional support of my choice of school which, unbeknownst to them (I think), was mostly predicated on the fact that I chose a college based on a popular TV show. Yet, they did. 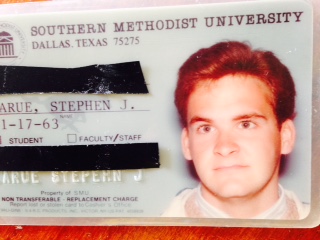 While at SMU, I spent several happy years writing for The Daily Campus and later interning at Dallas’ monthly city magazine, D Magazine, as well as the university’s alumni magazine, The Mustang. The city of Dallas was an exciting place to be, and people from all over the world traveled there due in large part to the global impact of the world’s most popular television drama series.

College was quite bittersweet for me because my mother was diagnosed with brain cancer during my first semester freshman year and would suffer for the next two years following unsuccessful surgery, chemotherapy and radiation treatments.  I was alternately thriving and riddled with guilt for not caring for my mother and terrified at the thought of losing her.

A week after finishing my junior year, my mother passed away in a nursing home at the age of 62.  Her death devastated my family.  That summer, I was awarded multiple scholarships for my senior year and was therefore able to attend SMU-in-Oxford where I was allowed to grieve for my mother surrounded by scholarly students studying Georgian & Victorian History of England as well as Arthurian Literature.

One of my most vivid memories attending Oxford University was my first one: While checking in and getting my room assignment at The Burser’s Office, one of my professors greeted me and told me how happy he was I decided to come after my mother’s recent death.  He then picked up my luggage and carried it for me to my flat, and then embraced me with both paternal and fraternal affection.  Dr. Jim Hopkins was a superstar to me, and to be thus treated by a superstar, touched me deeply. (Footnote: Dr. Hopkins retired this month from SMU after a long and distinguished career.) 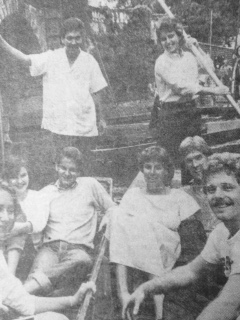 I dove into my studies, relishing reading Mallory’s Le Morte D’Arthur in Middle English, and learning for the first time what it felt like to be Scholarly.  I walked the Deer Parks of Oxford, studied in the ancient Bodleian Library, prayed in the chapel at University College, and felt the presence of my entire line of Ancestors cheering me on for having taken this leap in education.  I did not want to ever leave.

Up Next: Surfing Hollywood, Oscars As Doorstops and Buffy Summers.

Steve La Rue is an internationally recognized leader in Film & Television with 20+ years experience as a Development Executive championing such series as Buffy The Vampire Slayer, The X-Files, The Simpsons, King of the Hill, Battlestar Galactica, and Farscape. He writes, blogs, and consults on All Things Entertainment from his home at the beach in Santa Monica, CA, where he balances his life by surfing every damn day.
View all posts by Surfing Hollywood →
This entry was posted in TV Surf Report and tagged Dallas, Off The Wall, Origin Stories, SMU, Television. Bookmark the permalink.